“In the Mood for Love”, the amorous waltz by Wong Kar-wai

Screened for the first time in 2000 at the Cannes Film Festival, this sublime feature film, draped in melancholy poetry, which has become a cult movie for its silky aesthetics and heady musical theme, allowed the Hong Kong filmmaker – Lumière Award honouree in 2017 – a one-way pass to worldwide fame. 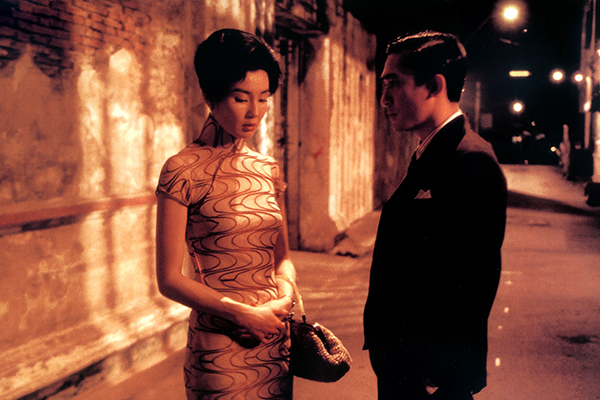 First, there is that singular narration, with dazzling fluidity and modernity, which leaves room for reverie and permeates the retina with its masterful use of colours and light. And then there is that bewitching arrangement of strings, accompanied by the lament of a plucked violin - the now-famous Yumeji's Theme, by Shigeru Umebayashi - which suspends all of time and immobilises the bodies of the two main characters in slow-motion scenes, often hazy, due to the wafting cigarette smoke.

In May 2000, when In the Mood for Love was presented in its work-in-progress state at the 53rd Cannes Film Festival, nothing yet had hinted at the success the film would subsequently encounter (which has risen to a level of cult status over the years), since having the effect of a bomb on the Croisette. Then, like dominoes, the film struck down the rest of the cinephile planet. The rhetorical question, “How many films like this do we see in a lifetime?” was asked by cinema critic Pascal Mérieau (Raymond Chirat Prize laureate at Lumière 2010).

Wong Kar-wai had just completed six acclaimed feature films, and placed himself, from a film criticism point of view, at the forefront of the new generation of Asian filmmakers with In the Mood for Love. Despite winning a Best Director Award at the 1997 Cannes Film Festival for Happy Together, the understated yet chic director with the perpetual dark glasses had yet to convince audiences in his own country.

Through this storybook drama, told like a stunning waltz between its two magnificent actors, Maggie Cheung and Tony Leung (who would win the Best Actor Award at Cannes), the Hong Kong director reaffirmed his taste for a cinema style always in motion, flush with colours, imbued with melancholy, and, above all, featuring impossible loves.

A meticulous and often indecisive filmmaker - a trait that has always prevented him from collaborating with a screenwriter - Wong Kar-wai would take two years to complete In the Mood for Love, working as usual without a script, and drawing inspiration from rushes already shot to build the structure of the film. “I hate writing because it's the loneliest part of the creative process. I tend to put it off as much as possible,” the director explained in a conversation at the Lumière festival in October 2017.

Through In the Mood for Love, Wong Kar-wai evoked adultery by placing his camera – a luminous idea! - on the side of the two cheated-upon spouses, thus relegating the lovers to outside the frame. "I knew that the film had to be like a waltz between two people who dance, together, slowly...", he explained in November 2000 in an interview with the review Positif. Wong Kar-wai would then become a scarcer presence, directing only three films in ten years: 2046 (2003), My Blueberry Nights (2007) and The Grandmaster (2013).