Leaving the Lumière Factories by the Dardenne brothers: recalling the workers of yesteryear

On Saturday, Jean-Pierre and Luc Dardenne, recipients of the Lumière Award 2020, created their own remake of Leaving the Lumière Factories, the first film in the history of cinema. With a five-star cast and a good-natured atmosphere, the Dardennes did not shy away from their chance to pay tribute to their cinema brothers. 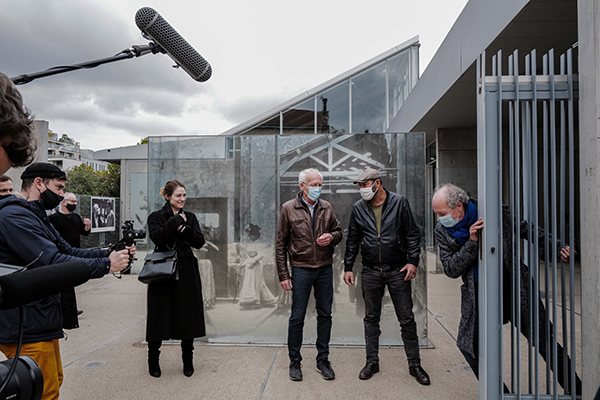 Two bikes in the Hangar are a few meters away from Mathieu, who is warming up the Peugeot moped, while waiting for instructions from the “Brothers”. "Are you girls ready?" yells out Rossy de Palma, always ready to motivate the troops before the shoot. The technical team and actors meet in the big theatre of the Lumière Institute to listen to the instructions of the Dardenne brothers, laureates of the Lumière Award. The Belgian duo is preparing to follow in the footsteps of the Lumière brothers, one hundred and twenty-five years later.

On the front lines, Kad Merad receives the first instructions: “In the foreground that we’re going to shoot, we need to open the gate. Kad, we want it to be you who pulls it open,” announces Jean-Pierre Dardenne. Just afterwards, his brother Luc adds, "Extras, as soon as he opens the door, we’ll be rolling!" The actors are each wearing the now-ubiquitous, mandated mask, in line with health measures. They will play the "workers" of the day, and can still "greet each other, Covid style", specifies Jean-Pierre Dardenne. 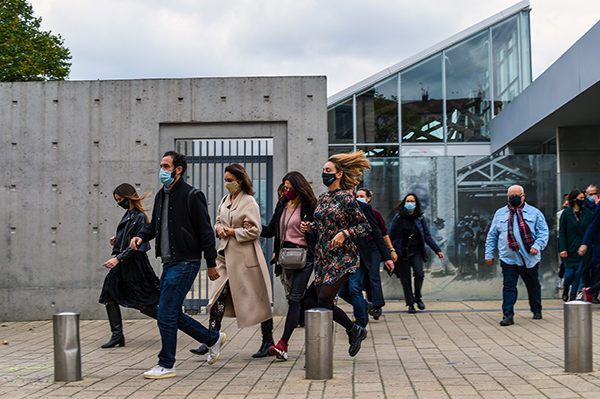 Clotilde Courau and Thierry Frémaux get on their bikes, while Mathieu, in charge of props and an actor for the occasion, is briefed by the elder brother: "You're waiting for your girlfriend, Emilie Dequenne. She’ll be sitting behind you and then you’ll go." At the head of the procession, Rossy de Palma, Karole Rocher, Abd Al Malik and journalist Patrick Cohen are preparing to join in the dance. "Damn, I'm nervous!” With laughing eyes and never at a loss for words, Kad Merad grips onto the gate of the Lumière Institute. Over the megaphone, the technical team calls the somewhat dissipated cast to order: "Stand by, we are ready to roll, please…” Action! Kad Merad pulls open the gate for the workers of the Lumière factories, version 2020, while Emilie Dequenne joins Mathieu on his moped. Thierry Frémaux brings up the rear on his bike, just in time, before the gate closes.

“Emilie, twenty years after Rosetta, you haven’t lost your touch!”

The time has come to film the background: "The camera is among you, behind Emilie's neck - it will follow the moped, which is moving away", announces Luc Dardenne. "You say ‘Cut!’ so that we know where we stop!" worries Vincent Perez. In the foreground, Emilie Dequenne, finds herself once again in front of the Dardenne brothers' camera. “Camera, action!" “Great job, Emilie. Twenty years after Rosetta, you haven't lost your touch," says Luc Dardenne. A reunion on Rue du Premier Film, which already sounds like a beautiful promise.