One day, one volunteer

Jean-Serge Ribera :
« Every year, I am wowed by the festival! » 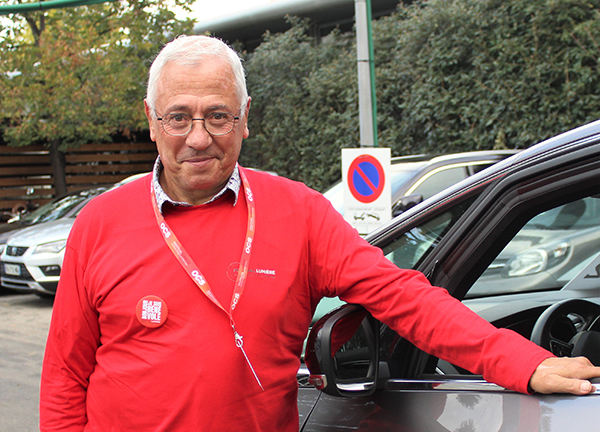 He knows all the streets of Lyon by heart. No, it's not Joe le Taxi (of the song by Vanessa Paradis), but Jean-Serge Ribera, an outstanding driver who has volunteered at the festival for three years. The birthplace of cinema holds no secrets for this native of Clermont who fell in love with the festival. "It was my son, Guillaume, also a volunteer driver, who introduced me to the Lumière festival. It’s an extraordinary event that I discovered a bit late, but every year I am wowed by the festival!” A former commercial management accountant, Jean-Serge also puts his talents as a driver at the service of the Lyon Nuits Sonores electronic festival and the WTA women's tennis tournament. With infectious energy and a communicative smile, Jean-Serge is passionate about his missions: "I love this 'ambassador' side and the responsibilities we have as drivers. It is also an opportunity to promote our city!" Not to mention the memorable encounters he has had with certain guests such as Robert Hossein and Fanny Ardant. "I also remember Daniel Auteuil, who asked me to take a picture of him with friends in front of the poster for the movie La Belle Epoque last year at the opening ceremony!" And when he is not driving, this doting grandfather, a football fan, takes pleasure in (re)discovering the gems of the festival. "I want to see one of my favourite films, Taxi for Tobruk". It’s the least we can do for this driver-cinephile!